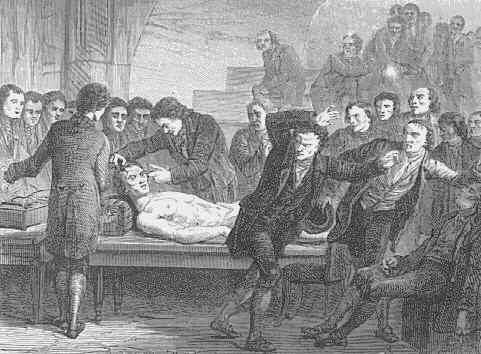 Shortly after Frankenstein was published, Dr. Andrew Ure, inspired by Galvani’s experiments on frogs, tested his theory of “Animal Electricity” on the corpse of an executed criminal. Performed before a curious public in the Anatomy theater of Glasgow University, the experiment produced some bizarre effects, including apparent breathing, violent leg extension, and extreme facial expressions: as the Quarterly Journal of Science and the Arts reported, “every muscle in his countenance was simultaneously thrown into fearful action; rage, horror, despair, anguish, and ghastly smiles, united their hideous expressions in the murderer’s face, surpassing far the wildest representations of Fuseli or a Kean. At this period several of the spectators were forced to leave the apartment from terror or sickness, and one gentleman fainted” (vol. 6, 1819, p. 290).